Localising a flagship initiative for a growing force in global aviation

Capita Translation and Interpreting (Capita TI) and Icelandair already had a long and successful partnership when Icelandair asked for help with localising their most original concept yet – the Stopover Buddy project.

Icelandair is one of the fastest growing airlines in the world, using Iceland as a hub to offer travellers an innovative, efficient and cost-effective way of travelling from Europe to North America.

Serving 27 destinations in Europe and 16 in North America, it also offers a unique stopover service, so travellers can extend their stay in Iceland by up to seven nights and really see all that Iceland has to offer. 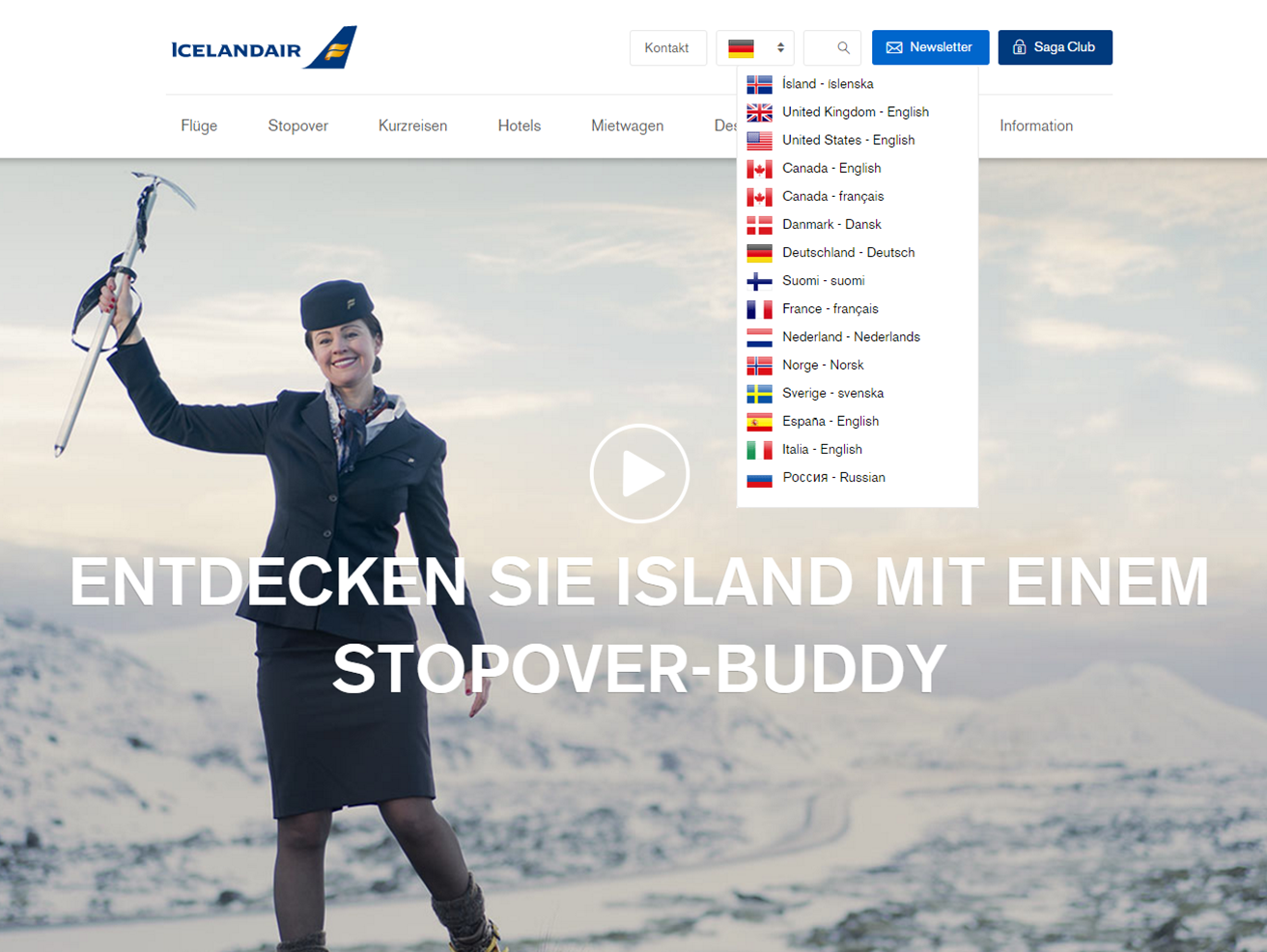 In February 2016, Icelandair launched a brand new initiative – the Stopover Buddy programme. This unique service partnered passengers on a stopover with a member of the Icelandair staff who had the same interests. The idea was that native Icelanders could show the cool hunters what’s hot and what’s not in Reykjavik, the foodies where to find the best bites and the nature lovers how to get up close and personal with the local wildlife.

As a proudly international airline, Icelandair offers its content in a number of different languages, so obviously the Stopover Buddy project was no exception.

The challenge for such a quirky initiative would be to preserve the chatty, whimsical tone of the English content when translating into 8 different languages.

Through years of experience of working with Icelandair’s content, Capita TI has built up a pool of linguists in all the relevant languages who are familiar with the stylistic demands of the text and how to adapt it.

This pool includes both translators to initially localise the content, as well as proof-readers to ensure compliance and give it a final stylistic flourish if necessary.

In addition, both a style guide and glossary have been put in place to ensure that all Icelandair’s style and terminology preferences are respected. In addition to translating the creative content that would promote the Stopover Buddy initiative, the linguists also needed to translate the more functional texts, such as FAQs and terms and conditions, and here a different approach was needed – less creative and closer to the source text, to ensure factual accuracy.

The combination of approaches paid off handsomely, with universal praise for both the Stopover Buddy project and the texts supporting it. This unique service can now be offered to travellers from all over Europe and North America with all the promotional and functional text in their own language, making sure they know exactly what’s on offer.

Visit the Icelandair website
We use cookies on our website to give you the most relevant experience by remembering your preferences and repeat visits. By clicking “Accept All”, you consent to the use of ALL the cookies. However, you may visit "Cookie Settings" to provide a controlled consent.
Cookie SettingsAccept All
Manage consent

This website uses cookies to improve your experience while you navigate through the website. Out of these, the cookies that are categorized as necessary are stored on your browser as they are essential for the working of basic functionalities of the website. We also use third-party cookies that help us analyze and understand how you use this website. These cookies will be stored in your browser only with your consent. You also have the option to opt-out of these cookies. But opting out of some of these cookies may affect your browsing experience.
Necessary Always Enabled
Necessary cookies are absolutely essential for the website to function properly. These cookies ensure basic functionalities and security features of the website, anonymously.
Functional
Functional cookies help to perform certain functionalities like sharing the content of the website on social media platforms, collect feedbacks, and other third-party features.
Performance
Performance cookies are used to understand and analyze the key performance indexes of the website which helps in delivering a better user experience for the visitors.
Analytics
Analytical cookies are used to understand how visitors interact with the website. These cookies help provide information on metrics the number of visitors, bounce rate, traffic source, etc.
Advertisement
Advertisement cookies are used to provide visitors with relevant ads and marketing campaigns. These cookies track visitors across websites and collect information to provide customized ads.
Others
Other uncategorized cookies are those that are being analyzed and have not been classified into a category as yet.
SAVE & ACCEPT